The Recircle Awards 2021 will incorporate a total of 20 awards covering a wide and balanced range of categories from across the tyre industry. The nominating and voting process for the 14 awards being announced today will be open to the general public. These award categories are as follows:

- Employee of the Year

Details of the qualifying criteria for these awards can be viewed on the Recircle Awards website at www.recircleawards.com

The final six awards with include two Lifetime Achievement Awards for the tyre retreading and tyre recycling industries respectively, in addition to four further regional awards, details of which will be announced in the coming months. 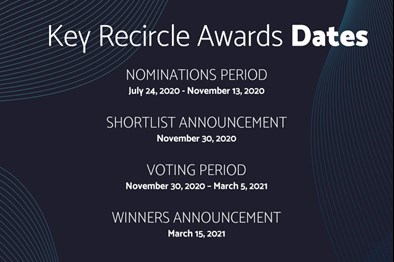 In addition to the announcement of the awards categories, VMS has also revealed details of how the nominations process for the Recircle Awards 2021 will work.

David Wilson, Managing Director of Valebridge Media Services, explains; “Anyone within the tyre retreading and recycling sectors is entitled to nominate a company, product or person for a Recircle Award, and if you feel your company deserves to be recognised, we actively encourage you to invite your customers and associates to tell us why.

“Nominations can be made via the nominations form on the Recircle Awards website. You can make nominations in as many or as few of the award categories as you like, although the process allows for just one nomination per person/email address in each category.

When making a nomination you will be asked to give a reason for the nomination, and this will be analysed by the Nominations Committee as part of the process of selecting the Short List for the Awards.”

Nominations for the Recircle Awards will close on November 13, 2020, and the Short List will be announced on November 30, 2020.

The short list of nominees will be selected by a specially constituted Nominations Committee consisting of the respective editors of Retreading Business and Tyre & Rubber Recycling plus a further eight individuals from the global tyre retreading and recycling industries selected according to their independent status and their acknowledged expertise within their respective fields.

The 2021 Nominations Committee is scheduled to be announced during the first week of September.

In the light of the decision by title sponsor Autopromotec to postpone the physical exhibition Autopromotec 2021 until May 2022, a new concept for the inaugural 2021 Recircle Awards event has been developed, which will see the winners of the key awards being announced on March 15, 2021, followed by presentations at leading tyre industry events located around the world during the first half of next year.

The first of these will be at Tyexpo Asia on the evening of March 17, 2021 at the Marina Bay Sands in Singapore following a Full Day Conference entitled “Tyre Retreading and Recycling: Perspectives of the South East Asian Market”, which will be hosted by Retreading Business. Awards will also be distributed during a virtual event concept currently being planned by Autopromotec, details of which will be announced in due course. Further venues for the distribution of Recircle Awards will be announced shortly.

Richard Wilson is a correspondent for The Tyreman. Since 2015, Richard has worked as a correspondent for all of the titles across the Valebridge Publications Ltd Group namely: Retreading Business, Tyre & Rubber Recycling, Commercial Tyre Business and Truck and Bus News. Richard has worked on/off from the age of 16 for the company and whilst gaining a Bachelor's Degree in Spanish and Business Studies at Coventry University, he developed his writing skills at the University paper and more recently writing his own independent blog.