Linglong Tire participated in the Bologna Autopromotec 2015 that was held from 20th to 24th May in Bologna, Italy. This was the first overseas exhibition that Linglong Tire took part in during its 40th anniversary year. As the Top Partner to VfL Wolfsburg, full-size pictures of Wolfsburg stars Kevin De Bruyne and Bas Dost were displayed for visitors to take photographs with. It also held an ‘interesting’ football shooting game that was said to be warmly welcomed by visitors. 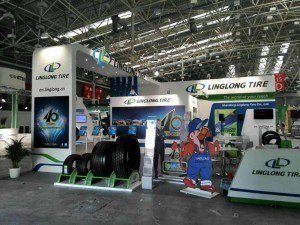 Bologna Autopromotec had been held once every two years since 1965. After 50 years, the recent exhibition accommodated more than 1,500 exhibitors and received about 105,000 visitors. About 81.53 per cent of them were from Italy. This country is a major manufacturer of cars and is one of the most important automobile markets. Italy has a population of around 59.13 million that possess more than 33.5 million cars.

Linglong Tire had expressed its ambition and confidence to increase market share in Europe and had taken a series of strategies to achieve that. One of them was cooperating with Lazio and ACF Florentina and advertising in their home courts during the 2014-2015 Season to increase visibility of the Linglong Brand. It also sponsored VfL Wolfsburg as the Top Partner and helped the team land the Bundesliga Championship this year.

With high performance products and target marketing strategies, Linglong Tire believed that it had the ability to compete with other tyre manufacturers and become a world-class company in the tyre industry.

Mary has over 20 years experience as the editor of our Malaysian sister magazine, The Tyreman. Based in Kuala Lumpur, she writes articles for us on the Malaysian and other South East Asian markets.